I just wanted to share a situation I ran into this week when trying to upgrade a server (a physical server) to Windows Server 2008. From what I have seen and read, the problem I was having was not an all to uncommon one, but nonetheless I wanted to share my own experience as those who have encountered the issue, may be able to expand on what I am writing here.

I was to upgrade a few older servers this week from Server 2003 to 2008. Thought it would be easy enough, and to be honest, the upgrade process itself was fine. The compatibility check did not find any compatibility problems with any hardware components so I thought I would be ok. Well, the upgrade finished to completion and on the first reboot, the server became unresponsive and would not boot. It was stuck with the Windows Server “load” bar scrolling across the bottom of the screen, and when looking at the server itself, the hard drive lights were solid green and nothing appeared to be happening.

I waited for a few minutes and rebooted, same problem. I then tried to launch Safe Mode, at which point the hard drives “froze” when the driver crcdisk.sys was displayed on the Safe Mode load screen.

When I rebooted the server, I saw I had the ability to perform a Windows Setup Rollback.

After selecting that option, the server booted to a screen such as the following:

Then, once this process was done, it indeed booted Windows Server 2003 as if I had never attempted to perform the upgrade in the first place. Now, the upgrade process did leave a couple of directories (get to those in a second), but other than that, my “down” server was fully restored to its original OS/Configuration. Quite honestly, I thought it was pretty cool!!

Anyway, I’ve been trying to figure out how this process works and though the information may be out there, I haven’t found exactly what I’ve wanted. The information, to date, that has been most helpful to me personally can be found here: http://edge.technet.com/Media/Application-Considerations-When-Upgrading-to-Windows-Server-2008/

When performing the upgrade, the following folders were created: 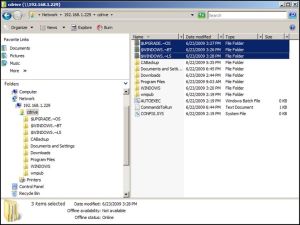 What I’m assuming right now, is that these directories are the Server 2003 “quarantine” and that they allow the Setup Rollback feature to work.

Anyway, just wanted to pass along the Windows Setup Rollback feature of Windows Server 2008 upgrades worked perfectly. If anybody has anything to add in regards to how the upgrade process works, or have a better explanation on the purpose of the three directories listed above, I’d love to hear what you have to say.