While I had an ESX 3.5 to vSphere going in one lab, I was installing a Windows 2008 R2 (Server Core Edition) Hyper-V cluster in another. The benefits of Hyper-V on 2008 R2 can be found pretty easily so I won’t go into them in great detail, but a brief list of its improvements are as follows:

I used two HP Proliant DL360 G5 servers with 32GB RAM (LAB-HVCORE-01 and LAB-HVCORE-02) connected, with iSCSI, to an EMC NS20 for the back-end storage. These are the basic, high-level steps I followed to complete the lab:

1. Install Windows Server 2008 R2 – Core on each server
2. Install the Hyper-V and Failover Clustering roles on each server
3. Configure the iSCSI connections to the back-end storage
4. Create the initial virtual network in Hyper-V Manager
5. Validate the cluster configuration
6. Create the failover cluster
7. Create a VM and make it highly available
8. Test failover

I’m going to assume you can install Windows Server 2008 Core and start at Step #2 (which is easy, but a good starting point). If you need more information on installing Server Core, click here and watch the videos posted by Netometer.

To install the Hyper-V and Failover Clustering Roles:

1. After logging into a Server Core system, enter the command start /w ocsetup Microsoft-Hyper-V to install the Hyper-V role.

2. Reboot the server and log back in when you are able.

4. Reboot the server once again…

5. Login and run the command oclist > c:\servicelist.txt. OCLIST will display a list of the available and installed services on a Server Core system. I export it to a text file so I can use Notepad to view the results. Open servicelist.txt and verify the Hyper-V and Failover Cluster roles are installed as shown below: 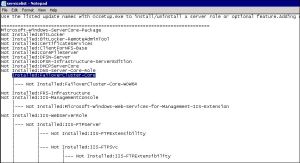 6. Repeat for each server