Citrix recently released XenServer 5.6 Feature Pack 1. XenServer keeps getting better as this is the best version yet. The free version is still very much the same but depending on the edition you purchase, you can get some pretty cool features such as:

I was hoping the distributed switch technology was going to be in the free version but no such luck. The features available in each version, taken from here, can be found below: 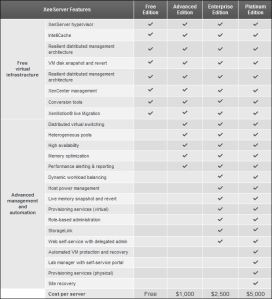